Just heading home from a whirlwind European trip, ostensibly for the purposes of attending #dasSMACC in Berlin.  I’m proud to have been involved with smacc as speaker, workshop presenter and occasional twitter moderator since inception in Sydney 2013.  It’s cemented itself as the premier conference for critical care and emergency medicine on a global stage – so after Sydney, Gold Coast, Chicago, Dublin & Berlin and pleased to hear it’ll be coming back ‘down under’ for the sixth smacc in Feb 2019 (having a year off)

smacc is best considered an opportunity to meet and connect in person with like-minded clinicians, many of whom already collaborate in the Social Media space under the banner of FOAMed.

My particular interest is in airway management in the rural setting, contextualising existing ‘best practice’ to the needs of those clinicians who must provide high-quality services without immediate back up (whether prehospital or rural-hospital based)

The ‘light side’ of airway management has traditionally been emphasised in the smacc workshops and FOAmed world, leading on as it does from the 2012 work by Weingart & Levitan on oxygenation and prevention of desaturation in the ED.  Back then, apnoea diffusion oxygenation was considered a ‘game changer’ for ED RSI.  Since then FOAMed has emphasised and made routine the use of ramping, of airway planning, of checklists, of nuance in post-intubation ventilation strategies and so on.

However the ‘dark side’ of airway management, namely dealing with the massively contaminated airway has been relatively neglected.

Standard anaesthesia practice has been to either fast patients, or pass a nasogastric pre-ETT…or if unexpected soiling, to place head down, left lateral and suction using a rigid-suction catheter such as the Yankaeur.

In 2015 at smaccCHICAGO, James DuCanto and I modelled the SALAD (suction assisted laryngoscope airway decontamination) technique as part of the airway workshop – we repeated this again in smaccDUB (Dublin, 2016) and many others have developed their own airway trainers to mimic airway contamination and train others in this technique.

So at dasSMACC James & I concentrated on supraglottic airways (particularly the second generation devices such as AirQsp, AuraGain and iGel)…and taught the specific skill of using these SGAs as a conduit to pass an ETT under fiberoptic guidance.

Now five years ago, if you’d said to me that fiberoptic skills were useful in the ED, I would have laughed – use of a fibrescope has traditionally been associated with the nuanced and Ninja-like skill of airway fibreoptic intubation. 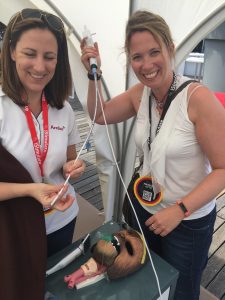 However, placement of a second generation SGA and use of an affordable device such as the Ambu Ascope means that an ETT can be rapidly delivered to the glottic opening, bypassing secretions, salvia and so on va the supraglottic. 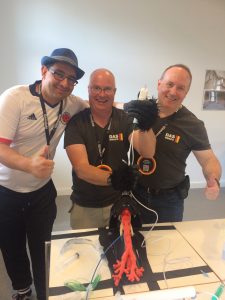 Brilliant technique.  I can see no reason why such affordable scopes aren’t the routine in the ED, especially when prehospital services are using second generation devices already – allows a ‘staged airway’ – placement of SGA in the field, then passage of fiberoptic scope and ETT in the ED with minimal interruptions or change of device.

James and I spent 8 hours training 160 people in this skill….then went on to run ‘pop up’ events in SALAD at #GelFEST (point-of-care ultrasound and airway training in a Berlin nightclub) and during the breaks in the main #dasSMACC programme. 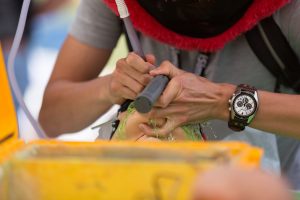 I reckon we’ve trained another 200 people via popups; all unofficial, all FOAMed and of course unpaid. 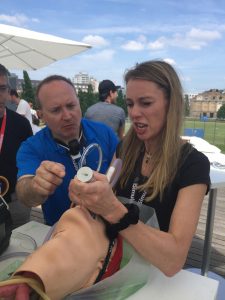 Prior to #dasSMACC I also spent time teaching SALAD to prehospital providers in Dublin and Cork – including a fascinated member of the public who was anxious to learn how to intubate as ‘had seen on TV’ – I reckon we had him up and running in under 90s!

Proves point you CAN teach airway on the run….

I hope others will be tempted to do the same.  Do contact the SALAD team if you want to make your own SALAD simulator or share tips and tricks…. 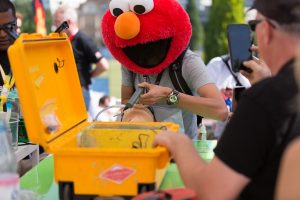 NB : I will be demonstrating the SALAD technique again on Chris Nickson’s ‘Critically Ill Airway’ course in Melbourne September 25/26th and again at the NSW Peripheral Hospital Emergency Conference September 27/28th as part of an airway workshop with Rich Levitan and myself

EM-Crit Having a violent SALAD with DuCanto