My friends over at Auckland HEMS have just released an app for both iOS and Android (see link at “test pilots wanted – HEMS app goes live“). I was lucky enough to score a pre-release download and play with it over the past week. It’s now been released live and available to all for feedback.

I’ve been a bit of a fan of the Auckland HEMS site – along with a few other retrieval services, they’ve made a commitment to having a web-presence (good for promotion, recruitment and also promoting information sharing via feedback). Their sim resource section is one I am watching closely, as there is great scope to share sim scenarios using the in-built function of the online community functionality of the iSimulate package

Other services, notably the collective UK HEMS, Sydney HEMS, RFDS have lead the way in sharing some of their resources in open-access format, to help others to learn and develop own procedures, as below :

Putting procedures and information up on the web is one thing…but the ultimate functionality for a retrievalist would be to have all of this information available even without immediate web access. Given the space constraints of a flight suit, and the ubiquity (and of course practicality) of a smartphone, it makes sense to develop retrieval apps that can be used on the primary communication device (iOS or Android phone).

Having a smartphone allows access to not just phone calls, but messaging, web access (if in range), ability to view documents, access apps etc. Smart app developers may also take advanatage of in-built functions such as torch/vibrate/sounds to enable visual, haptic & audio prompts. Inter-app integration for access to weather and map/GPS functions is achieveable. And the new iPhone reportedly has a barometer…opening the possibility of a retrieval app that helps flight planning and working out O2 requirements.

So far no such app exists…but there have been some rapid developments in this area in recent times. The Auckland HEMS app is interesting, in that the authors (Robert Gooch, Chris Denny under IT tutelage of Scott Orman) have used the iBuildapp web-based service to create the content, thus saving a huge investment of $$$ on an app developer. As they say “if you can create a powerpoint presentation, you can create an app”. What I like is the commitment to evolve the app and update in real time.

The app starts with a simple splashscreen, then once loaded moves to a very easy to navigate interface, reminiscent of the UKHEMS SOP database web-interface.

The initial screen has large, friendly coloured buttons that are easy to select even when wearing gloves, allowing access to each of :

Drilling down, the content is easily displayed and large – this is a plus, as small text is both hard to read and hard to select (especially in gloves). However I was disappointed to see that checklists did not actually allow ‘checking’. This is a shame – for a daily kit check, ability to select actions completed and then archive the actions (eg: CSV export via email) would be useful.

For a crisis checklist, the ability to check items or even build in audio-haptic-visual alerts using smartphone alarm-vibrate-torch functions can be very useful in a crisis, especially when time critical. The obvious example is that of RSI – and for a masterclass in how a checklist can be made part of workflow, see the excellent iRSI app, reviewed elsewhere. The ‘hot debrief’ function accessed from the bottom navigation file was useful – easy to access wherever you are in the app, this allows quick notation of mission details such as nature of mission, team members, timings and also commentary on any issues with kit, at the hospital or in transport. Again, ability to capture this data and export it to a spreadsheet for audit or training purposes would be invaluable. 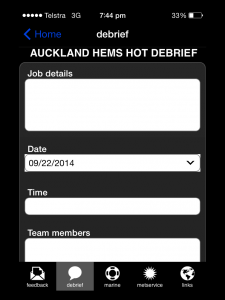 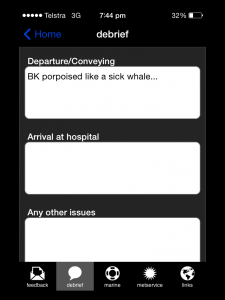 I was pleased to see the inclusion of some FOAMed material, including Scott’s cric-con concept for emergency surgical airway. I couldn’t find mention of the Vortex approach, but as time goes on I think this and other resources will be incorporated both into the app and into common practice. Links to relevant sites are included… Integration of marine and weather bulletins was a nice touch… …along with calendar and contact info for operational purposes Ultimately it is hard to demonstrate all functions with screenshots. My advice – get in quick, download the app and give your feedback. It is available from http://aucklandhems.com/2014/09/21/test-pilots-wanted-auckland-hems-app-goes-live/

I am fully confident of rapid improvements with subsequent iterations. To my mind, the scope for making an open-access app with broad-brush functionality according to the list above is achievable. The question, of course, is how much content should remain in-house (mindful of the considerable investment in time, money and intellectual copyright of content) and how much can usefully be shared.

Whether making one’s SOPs and resources open access is worth it remains unanswered. For blokes like me, trying to do best for rural patients, there are clear advantages in keeping up-to-date with current practice and especially in aiming to use the same kit and infusion regimens as the retrieval service. I appreciate however that there may be concerns in making one’s protocols available for all to share.

For the present, I am grateful for the availability of online resources such as those from Emergency Medical Retrieval Scotland, SydneyHEMS and UKHEMS…