I am obviously something of a medical dinosaur. I trained in the UK. Once qualified as a doctor, I spent a year as a ‘House Officer’ befoer being granted full registration with the UK General Medical Council (the term House Officer based on the time when newly qualified doctors were compulsorily resident on the hospital grounds). Career progression was fairly straightforward, from House Officer…to Senior House Officer…to Registrar (post Membership exams)…then Senior Registrar…then finally Consultant. The Australian system is similar, from Intern…through to Resident…Senior Resident…Registrar…Consultant (post Fellowship). I gather the Americans run along the lines of Intern-Resident-Attending.

But all has changed. Speaking to Brits looking to migrate to Australia to escape the imminent collapse of the NHS, I am increasingly befuddled by the newspeak nomenclature of doctors-in-training. They seem to refer to themselves as FY1/FY2s (or F1s, F2s), CT1s, STs. They are forced to jump through arcane hoops (what the Dickens is an ARCP?). Moreover, they seem to be universally referred to as ‘trainees’. 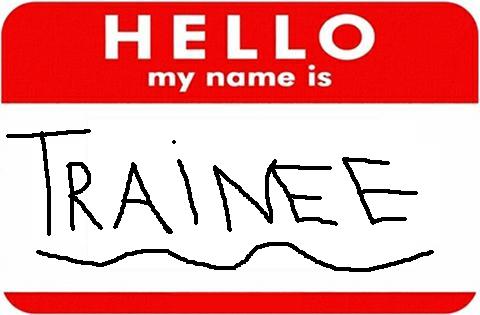 Hearing a doctor being introduced as ‘Steve the ST4 trainee’ makes it sound as if Steve is here on work expereince from the local school, rather than a fully-qualified doctor, with several years postgraduate training under his belt, Membership of the College of Physicians and only a few months away from being a Consultant.

Meanwhile, every other man-and-his-dog seems to be granted some sort of increasingly long job title – it seems that everyone is a Consultant nowadays, or a Specialist – even if that means they are a ‘Consultant Specialist Podiatric Surgeon’ (or podiatrist to you and me) or a ‘Senior Specialist Nutritional Consultant’ (or dietician).

Some Human Resources officers in NHS Trusts even insist that doctors are not allowed to put the title ‘Doctor’ (Dr) on their name badges as this ‘would be confusing for patients’ as they are ‘just trainees’.

This, for some reason, makes me sad. It also cements in my mind the utter crassness of ‘Human Resources’, implying that people are objects to be manipulated, like widgets…rather than individuals. Highly trained and professional individuals in the case of those undertaking postgraduate training in the NHS.

In these days of #hellomynameis, one would think that it would be important to be clear not just about one;s name, but also about one’s seniority (or otherwise) in the medical hierarchy. The progression from House Officer through Registrar to Consultant was fairly clear, even to the lay public.

I can only gather that the abandonment of the title ‘Doctor’ and the confusing mishmash of names, as well as the general all-encompassing naming of these doctors as ‘trainees’ is about control. It certainly isn’t about being clear to patients.

“Good evening ladies and gentleman. We hope you have enjoyed your flight on British Airways flight 4567. Jane the trainee will be landing the aircraft shortly”

Which would you prefer as a patient? To be operated on by “Steve the trainee” or “Steve, Senior Registrar to Mr Spratt”?

Names are important, as are titles. Use them. A recent survey on Doctors.Net.UK supports the profession’s preference for the abandonment of the generic term of ‘trainee’. Yes these doctors are still undergoing training – but lets not forget that they are already qualified as doctors and are undergoing an arduous postgraduate training. Referring to them as ‘trainees’ really does imply that they have wondered in off the street for a few weeks work experience and are not to be trusted.

You can access the survey results and comments here.

The author is on DNUK and remains anonymous.