The dreaded ‘cannot intubate, cannot oxygenate’ scenario is one which most clinicians will never encounter.  In elective anaesthesia, the CICO rate has been described by Cook & Macdougall as 1/5000 in elective cases, proceeding to emergency surgical airway in 1/50,000 (a more recent study from Japan describes CICO as 1/32,000 – either way, a rare event). CICV although rare, accounts for for up to 25% of anaesthetic deaths!

The frequency is higher in emergency airway management, especially in the management of trauma with an incidence reported of 1/200.

As such, it’s a skill for which emergency and anaesthesia clinicians train – even though, like pilots training for ejection at altitude, this is something they hope to never perform.  Failure to perform the technique is not uncommon, due to the high cognitive burden in such a situation – loss of situational awareness and breakdown of communication can be contributing factors in any crisis – as exemplified by the case of Elaine Bromiley (see the excellent review here from Nicholas Chrimes and Martin Bromiley).

As for technique, most of us use a scalpel-finger-(bougie)-ETT approach, having identified the cricothyroid membrane reliably using Levitan’s ‘laryngeal handshake’ approach.  Andy Heard of Western Australia has also been instrumental in delivering a standardised approach to what the UK Difficult Airway Society is calling ‘front-of-neck access’ (FONA).  Unless you are terribly bad at anatomy, it would be hard to conceive any other surgical approach to the trachea then front-of-neck…some of Dr Heard’s videos are here.

There are a variety of options for teaching this skill – the ATLS/EMST course typically uses an animal model, as do many induction and airway courses which use pig or sheep larynx-trachea to give clinicians the feel of handling real tissue.

These aren’t cheap.  Back in 2004, Varaday, Yentis and Clarke described a simple DIY cricothyrotomy trainer  “A homemade model for training in cricothyroidotomy” Anaesthesia 2004, 59: 1012-1015

Variations on this theme are well known amongst the FOAMed community, including

One thing strikes me – the vast majority of these trainers do not have a head attached.  Is this important?

Well, actually YES.  it’s all very well to practice the procedure of scalpel-finger-(bougie)-tube…but one also needs to consider the ergonomics of the procedure – do you approach from the head end? Or from the side of the bed? If so, how does this work – are you left handed? Right-handed? Will the anaesthetic circuit/suction/monitor leads impeded your access to this side of the patient when need to perform a surgical airway in a time-critical manner?

One of the things that frustrates me is teaching this technique on models that are essentially just a pipe covered with simulated flesh and landmarks.  There’s no chin in the way. There’s no blood.

AIME George Kovacs makes a good case for using cadavers, but of course these aren’t available to many of us.  Nor are high fidelity mannikins or trainers.  The DIY models described above are good for task training – but could be improved by consideration of the position of the patients chin, especially if using a needle access technique.

So – here’s a simple model that can be made for under $5 AUD – yep, under $5.  Yes it’s not a cadaver, no it doesn’t have the feel of tissue…but rather than train infrequently using expensive models (cadaver-animal-commerical trainer) there’s more bang-for-buck in using low cost models to task train and focus on aspects of technique. And I reckon the angle of approach with regard to the chin is important to consider. Since posting this 26-06-16, I’ve had a few comments re: improvements. The most obvious is to simulate the importance of resting the dominant (cutting) hand on the sternum in order to perform the ‘laryngeal handshake’ if using a scalpel approach.

I agree 100% – simple options include abutting the head against a pillow, box or FOAMed block to mimic the chest wall and ensure the haptic feedback of hand postion when performing this procedure.  An alternative is just to mount the head against an old Resusci-Anne torso. 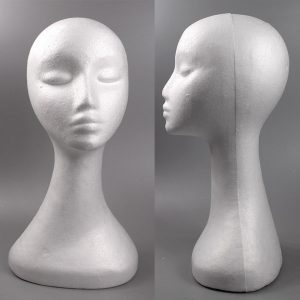 You CAN also pick up polystyrene heads with busts on eBay – these would be perfect!

Thanks to Chris Nickson of the Critically Ill Airway course for reminding me of this – perhaps we’ll give it a go next CIA course! See you there….

What do you need?

– polystyrene model heads (on eBay – 10 for A$10)
– homemade model larynx (I make mine from Oogoo, using the technique described by Michael Edmonds when we were mucking about at MedSTAR – see his write up here). Unit cost is around A$2 each

It’s not pretty (Chris Hicks @HumanFactorz) reckons it was a bit Prometheus!) but it works. Next step – add a sachet of tomato sauce – a technique tried by Anthony Lewis and Rob Simpson in the airway sim session at #smaccDUB – then we’ll have the simulation of blood and STILL be under $5 AUD per model!

Making a mold for larynx

How to Make Molds with Step by Step Instructions